The wrestling world left one of the last remaining heavyweights of the NWA. Harley Race passed away today at the age of 76. The 8 time champion was one of the biggest, most important and grandest wrestlers of the territory system, winning belts from the likes of Ric Flair and Dory Funk.

I best remember Harley as part of the Heenan family during the twlight of his career. He was the first King of the Ring in WWF, with the regalia, cape and crown being a part of the WWF scene for years, passing to Jim Duggan, Haku and Macho Man Randy Savage.

Harley would be inducted into the Hall of Fame upon its return in 2014, a welcome addition.

A tidbit that came out today, Harley Race was the last living member of the 1988 Andre The Giant led team for Survivor Series. Perfect, Rude, Andre, Frenchy Martin, Dino Bravo and Bobby Heenan are all previously deceased. Everyone in this picture is now gone and that’s just sad.

In memory of the great Harley Race, here are some fine memories of the man.

2 time WWE Hall of Famer Bret “The Hitman” Hart was tackled tonight at the Hall of Fame by a “fan” in a rasta hat.

The Hitman seemed okay and finished his speech. Still one needs to worry about the 61 year cancer and stroke survivor.

The WWE Hall of Fame is tonight and recently it has been reported that this year will again include a Legacy Class. The Legacy Class began in 2016 as a way induct long dead famous names from the early to mid 20th century into the Hall of Fame without doing long form regular inductions. Past stars like Ed Strangler Lewis and George Hackinschmidt now sit in the WWE Hall of Fame due to this wing.

I’ve had some problems with this going back to the 2016 Legacy Class. In 2016, WWE included Lou Thesz, who despite long deceased obviously deserved a full induction with stories of his career and acceptance of his family. We will never get that as WWE considered Thesz to be in the Hall of Fame now. He is now even on their Hall of Fame page.

The biggest issue with the Legacy Class is that they get about 10 seconds in a video. Here’s the 2016 video.

Cut to last year, and WWE did something unexpected, they included two historically important WWE names (whereas before it was only wrestling at large non WWE names) 2018’s Legacy Class included Lord Alfred Hayes and former WWWF champion Stan “the Man” Stasiak. It was a gut punch for these two names not to get a proper induction. It also opened up the door for WWE to get even worse with who they include in the Legacy wing, and in pure WWE style, this year is even worse. Two of the Legacy inductees this year not only aren’t pre Golden Era wrestlers, they are huge names. So let’s take a look.

The highest ranked Legacy inductee since Lou Thesz, Bruiser Brody’s inclusion in the Legacy section is both nonsensical and offensive at the same time. Brody was a big big deal in every organization he wrestled for. Similar to Stan Hansen, and Vader later, he became a big deal US heel in New Japan, where he captured the International Heavyweight Championship 3 times. He also wrestled for Vince Sr’s WWF, Verne Gagne’s AWA and Fritz Von Erich’s WCCW in major feuds as a top heel.

Brody is considered to be by his peers to one of the greatest minds in wrestling period, he regularly fell into the role of booker in his travels. He was just a man who got professional wrestling.

Perhaps the only reason to avoid his induction, especially with his wife accepting a Legends deal for him years ago, is his death. Bruiser Brody was brutally murdered in 1988 in the locker room in San Juan Puerto Rico by fellow wrestler and booker, Invader 1. Brody was stabbed by Gonzalez and left to die. It is very possible Brody might have survived his ordeal if medics had come quickly. Jose Gonzalez, Invader’s real name, was never convicted of his death. It is one of the greatest tragedies in wrestling. 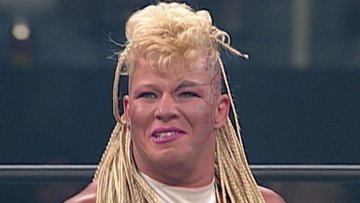 The other head scratcher of this years Legacy Class, Luna Vachon’s entire career was during the 1980s and 1990s. She even participated in the storied Attitude Era. Her inclusion this way stands out like a sore thumb.

Any fans of WWF in the 1990s will remember Luna as Bam Bam Bigelow’s manager, a challenger to Sable’s initial run as the Women’s champion in 1998 or as a member of the Oddities. She had memorable run as well in WCW during their “women’s division in the late 90s heralded by Madusa.

She even has to notoriety of being the first female ever included in a video game, as a playable character in 1995’s WWF Raw.

How Luna was left out when her contemporaries Jackie, Madusa, and Ivory were included is unclear. What is clear is that this is distrespect both to her family and to her legacy. She deserves more than 10 seconds in a video.

SD Jones was the first jobber to ever receive an action figure, with he getting not just one, but two variations in the 1986 line of LJN rubber wrestling figures. 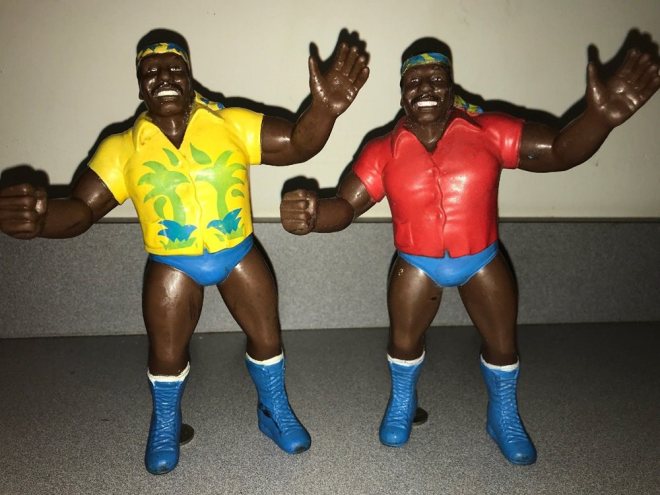 SD Jones, when he inducted fellow Undeserving level inductee, Tony Atlas in 2007 mentioned his tag team with Atlas as a highlight of his career. The shame for him is that his “tag team” wasn’t anymore than an occasional match up with Atlas and never got the pair any legitimate wins or accolades.

Jones spent his entire main career as a jobber, wrestling mostly as a preliminary level, with wins and feuds being few and far between. Like fellow inductee Johnny Rodz, his “well known” jobber career should not have guaranteed induction even in the Legacy series.

I am going to guess that his inclusion means Iron Mike Sharpe, Duane Gil, Barry O and Barry Horowitz will all make it into the Hall of Fame. “Everyone gets in” indeed. 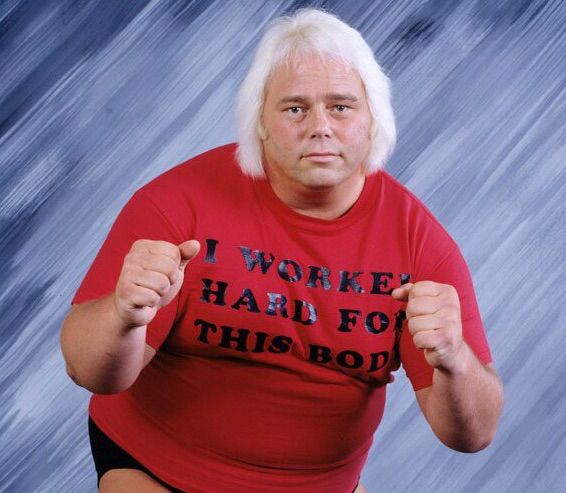 Playboy Buddy Rose is best known by WWE fans for his odd ball Blow Away Diet featured on WWF programming in the late 1980s. It is as bizarre now as it was then.

Apart from serving mostly as a jobber in WWF in late 80s, Rose also featured in the WWF twice before, during Backlund’s tepid run in the early 80s and in 1985 renamed the Executioner. Rose has the notority of being the first person to lose a match in Wrestlemania history in his losing effort to Tito Santana during Wrestlemania 1. 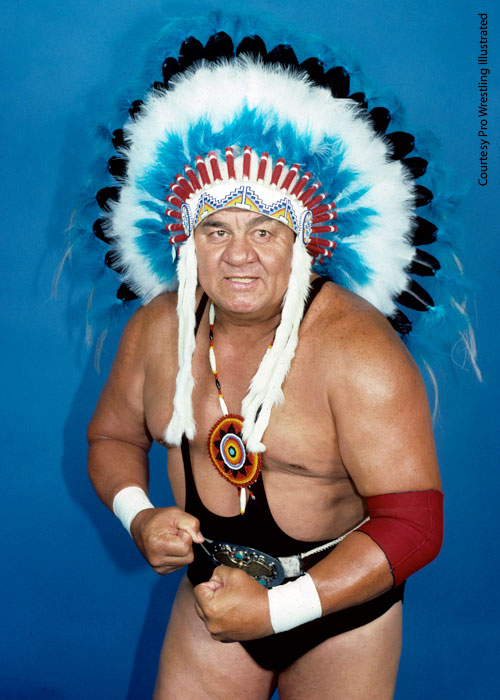 Wahoo has been a long time coming for induction. A funny side note, one of our avid readers has for many years answered any poll where I ask who should be inducted in the Hall of Fame next, with the answer Wahoo McDaniel. Whomever you are, I hope you are happy.

McDaniel, a former football player was a big deal tough guy and major hand in the NWA throughout his 20 year career. Unlike WWE Hall of Famer Jay Strongbow, McDaniel never had a long run with Vince or Vince Sr- his NWA-centric career makes him the foot note he is today in the WWF Legacy Wing- yet it could be argued he was the most important Native American character in the history of wrestling. 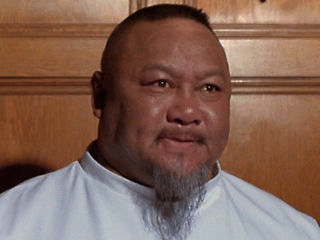 Tag Team partner to Mr. Fuji, Professor Tanaka is best known for his three runs with the WWF Tag Team Championship. Tanaka also featured heavily in movies in the mid and late 1980s including Running Man and PeeWee’s Big Adventure.

Primo Carnera is best known for his professional boxing career where he stood mostly undefeated than he is his professional wrestling career. His inclusion here is due to his “box office appeal” in the 1940s, at a time when Jim Londos was ending his own career and before the likes of Lou Thesz, Pat O’Connor and others took over the industry.

Shinma is the pre Jack Tunney WWF figurehead president from 1978-1984. A backstage player, he is credited for the WWWF/NJPW talent exchange in the 1970s as well as implementing the light heavyweight division that brought the world fellow Hall of Famer Tatsumi Fujinami.

Shinma is a perfect example of how to Legacy inductees should be used.

Barnett worked in the backstage of WWF in the mid 1980s as well.

The final inductee is a man named Joe Cohen, who apparently helped found the Madison Square Garden Network. I could find almost no information on this person, so I won’t be rating him.