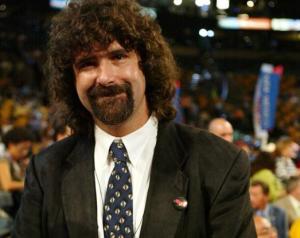 Mick Foley is beloved by wrestling fans around the world. Mrs. Foley’s Baby Boy has IT. He has the intangible, unteachable character and drive which make professional wrestlers successful in this business. Theoretically, Mick Foley shouldn’t have been successful. His look and character was different than the classic main eventer in wrestling.

Foley is overweight. His characters have always been strange and weird.Promoter after promoter relegated him to a “Crazy Man” act. Normally these characters have a limited shelf life in a promotion (Missing Link, Kamala). Foley broke in at the tail end of the territory system, giving him to opportunity to hone his craft at the UWF, in Texas’ WCCW and eventually early WCW. But none of the “powers the be” every saw anything in Mick Foley. His character Cactus Jack was another wildman character who would come into a territroy, beat up lower level faces, immediately get into a feud with a high level face and lose. (Think Sting in WCW) And that’s it. He should have been a white version of Kamala (in how used only)

Well then why was Mick successful? It was his drive and personality. He had the force of personality which in any business leads to success. When Jim Ross brought Mick into the WWF in 1996, he was still following his old mold. He was a crazy man, who ripped his hair out and lived in boiler rooms. Nothing about that character screams main eventer. He then got the kiss of death for all “strange weirdo evil guys” in a feud with the Undertaker. Undertaker has a long line of dangerous wild-man characters he “overcame” and therefore destroyed credibility for (Kamala, King Kong Bundy, Giant Gonzalaz, Great Khali, etc) Now despite the fact that Mankind was actually given a victory over the Undertaker, his character easily could have worn out its welcome after 1996. Foley got his one shot at WWF Champion Shawn Michaels (the great squasher of talent during these days) and easily could have faded away.

But something happened. Foley started to get over. He got over with the crowd because of his viciousness, but it was his promo skills that made him. Everyone believed that Mankind was a person with real feelings and not a simple caricature of a insane person. His promo with Jim Ross is still considered to be one of the best of that era. He was too good to be ignored. (Wish I could find this promo anywhere online, if you know of a copy online, let me know)

Still the WWF tried to box him in. In 97 and 98, he played Cactus Jack, Dude Love and Mankind. His multiple personalities became his gimmick. And each one got over with the fans. Foley shined in every challenge he was given. 1998 was his break out year where did everything. He appeared three time in the Royal Rumble, turned heel and feuded with a newly christened WWF Champion in Steve Austin and had his “Wow” moment at the King of the Ring in Hell in a Cell. His second feud with the Undertaker cemented Foley as a main event talent.

Still, Mick hadn’t reached the pinnacle of his craft. He was not world champion. And generally speaking, no one believed that he ever would be. But the pops and cheers were impossible to ignore.   FOLEY IS GOD was a sign seen regularly in audiences all across the country. Foley’s talent forced the organization to give him a run with the belt.  This type of performer is rare. Bret Hart and CM Punk are two others who have done this. But Hart was always a wrestler’s wrestler (like Bob Backlund) so there was precedent for his run. Foley, like CM Punk, should never have gotten the big belt , if all those in the “know” were correct about him.

Take a look at the response to Mick Foley, Mankind, winning his first WWF title. The fans are overjoyed.

I mentioned Punk above. Punk and Foley are alike. The WWE today is just like the WWF of yesterday. It tends to think it has all the answers in the business. It knows who will succeed and who will not. If you watch Punk’s DVD (which you should, absolutely amazing), you will see that everyone (Vince, HHH, Cena etc) believed Punk wouldn’t be successful. In fact, if not for Paul Heyman, Punk would never have reached TV.

And this makes him the same as Foley. Foley found himself in ECW. Paul Heyman helped him realize his potential and also did that “Paul Heyman magic” of giving a talent pride and belief in themselves.

Mick Foley was big. Super big. He was the third most important wrestler of the Attitude Era. Austin, Rock and Foley (Not HHH). They were the one, two, three of the era. And we all know it was the most successful era in the history of WWE. Foley not only deserves the Hall, he should have been in years ago.

Madison Square Garden. Its as simple as that. Foley, due to his watching Snuka/Muraco cagematch in 1983, got into wrestling. Plus he’s a New York native.

Plus this was a long time coming. Foley left for TNA in 2008 (after a stint as Smackdown commentator, which reportedly hated) WWE is known to punish those who go outside of their grasp, so this one has been held off for awhile.

And the WWE Hall of Fame seems to be improving. I am making a wild guess, but based on last year and this, HHH’s influence is apparent. No more Johnny Ace picks. Hopefully this means less Kokos and more Foleys.

Possibly other hardcore individuals, specifically ECW guys. But really Mick is in a class of his own

WWE wants to only induct Koko B Ware level people.

Also check out WWE’s induction video for Mick. It is one of their best in history. It really makes you feel and understand.